WATERLOO, Ontario --- In 1974 a young man from Kitchener, Ont. walked into the East Village of New York City and found a place to live on 4th St., between Second and Third Ave., in one of the tenements that line the streets of this storied neighbourhood.

John Tank and his tenor saxophone were home. 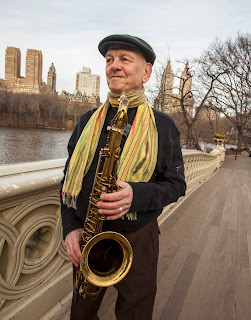 John still lives in the same building.  He wrote a song called Two O'Clock Sun about the light that came into his main floor apartment once a day for 15 minutes.  It is on one of his five CDs.  For 39 years John's made his living as a jazz musician in New York City.  He played the Village Gate in Greenwich Village with Charles Mingus --- one of the most famous jazz clubs in the history of the music with one of the giants of 20th Century jazz.  He opened for Sonny Rollins in Toronto. These days John plays regularly at Fat Cat in the West Village.  Not bad for someone who grew up on Duke Street in downtown Kitchener in the 1950s and 1960s.

John was inspired by a local music teacher named Mike Bergauer. After two years of lessons Bergauer sent John to Paul Brodie in Toronto for more advanced schooling.  John drove into Toronto once a week for lessons with Brodie.  At the time, Brodie was the most recorded classical sax player in the world.  Brodie was so impressed with John's playing, he helped John get into the prestigious Berklee School of Music in Boston. In 1969 John returned to Kitchener and played gigs in London, Stratford and Toronto.  But he was way too ambitious, restless and talented for the small jazz scene in Ontario.

In 1974 John organized a farewell show in Kitchener.  It was at the Lancaster Hotel.  After the gig John headed for New York City.  He went there with no Green Card, and lived illegally there for 15 years. After coming forward during an amnesty he was given status as a legal resident.  That's was the price and John happily paid it. He was living in New York City and making his living as a jazz musician.  He returns to Kitchener once, sometimes twice a year, to play for hometown fans and supporters.

The remarkable story behind this incredible musician continues.

This Sunday, The John Tank Quartet plays The Jazz Room in downtown Waterloo.  Doors open at 3 p.m. Music until 7 p.m. Joining John for this hometown gig are some of the best jazz musicians playing today. 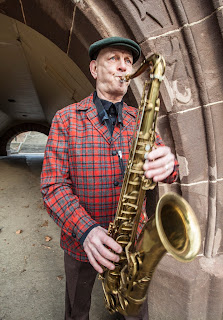 Dave Yonung on bass.  Young was the bass player for Oscar Peterson for 25 years.  Bernie Senensky on piano.  Bernie recorded 15 CDs as band leader, many more as a sideman and earned multiple-Juno nominations along the way.  Ted Warren on drums.  Warren is the artistic director of the Grand River Jazz Festival.  This will be one of the best jazz shows in Southern Ontario for all of 2013.  Tickets are $20 at Words Worth Books in Waterloo.  Also at Encore Records and Far Out Flicks in Kitchener.