Smalls is the best jazz club in New York City

NEW YORK CITY --- If you love live jazz you must make a pilgrimage to a tiny club in the West Village called Smalls.

It is a few steps from 7th Avenue on West 10th Street in Greenwich Village.  It is the best club in New York City, and that means it may be the best jazz club in the world. (www.smallslive.com).

There is live music here, seven days a week, 4 p.m. to 4 a.m. Simply put, there is no place like it. It is a religious institution in the West Village Jazz Scene, and enormously popular with those who know the music better than anyone else ---  jazz musicians. 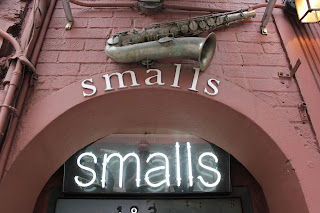 The co-owner and manager, Spike Wilner, and his partner Mitch Borden, are all about the music.  The cover is $20 and you can stay all night long.  You will hear Joel Frahm (tenor sax), Peter Bernstein (guitar) and Mark Soskin (piano), among many others.   Roy Hargrove (trumpet), Chris Potter (tenor sax) and Esperanza Spalding played there, and continue to make appearances there, long after they became international stars. Mitch works the door nearly every day when the club opens about 4 p.m. He used to play a violin, sometimes a guitar and lately, a  banjo. 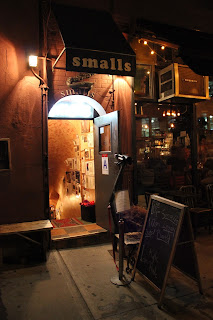 You will hear great music and nobody will bug you to buy a minimum number of over-priced drinks.  There are no over-priced drinks.  But there are CDs for sale, live recordings of the best shows at the club.  Smalls Live is one of the best jazz labels in the world. Check out the calendar of shows, the CD catalogue and the live streaming that is available at smallslive.com and  then start making plans for a trip to New York City.

The club is at 183 West 10th Street. In the earlier part of the evening Mitch is usually working the door.  After paying Mitch, you walk down a steep flight of stairs to a small landing, turn left, down another three steps, and you are in The High Temple of Live Jazz.  Show respect for the music and the musicians.  If you talk during the show you will be shushed.

Behind the stage is a large-framed picture of the famous, smiling face of a young Louis Armstrong --- that picture is the club logo. I love that picture.  Louis' trademark smile beaming over everyone in the club.  The greatest jazz musician who ever lived was accused of being an Uncle Tom for the way he smiled before white audiences.  But Dizzy Gillespie set them straight.  Satchmo hated racists and hated racism, but he was not going to let either suck one minute of joy from his life, Dizzy said. 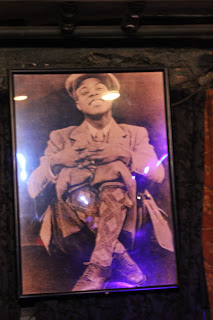 Smalls is named after a famous club in Harlem that was called Smalls Paradise, which opened in 1925 at the height of prohibition.  It was racially integrated from the beginning with seating for 1,500.  It became one of the top three jazz clubs in Harlem at that time, along with the Cotton Club and Connie's Inn.  When Mitch was opening Smalls in the West Village, he reached back in time for the name.

The ceiling in Smalls is low, the bar runs along most of one wall and the stage has a new Steinway piano.  All of the shows are recorded.  You can stream this amazing music over the Internet. The club shares revenue from music streaming with the musicians who created it.  It is ground-breaking arrangement not only in New York City, but anywhere in the world.  In the picture blow, Stacey Dillard is on tenor saxophone, Josh Evans plays trumpet and Fank Lacey plays trombone.

On a the wall behind the piano bench is a large portrait of Harry Whitaker, the legendary jazz pianist who mentored many in New York.  At one time Harry was the music director for Roberta Flack.   Harry was a regular on and off the stage at Smalls.  The prolific pianist, composer and arranger sat in a back room playing chess by the hour, taking on all comers.  The first recording released by Smalls Live is a solo piano show by Harry.  After the great man died on Nov. 17, 2010 his cat Minnow came to live in the club.  You can see this beautiful cat lounging on a chair, a table or maybe on the piano during a show. In the portrait on the wall, Spike is playing the piano, Minnow is perched on top of it, and Harry is playing the vibes. 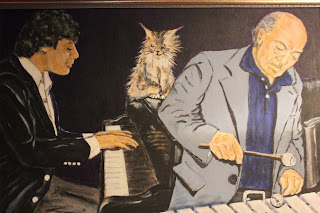 The nearby Village Vanguard has more history, and I loved hearing Joe Levano play in that storied venue.  But the Vanguard charged a $25 cover for one set of music and insists that everyone buy at least two over-priced drinks.  It is the same story at The Blue Note, Birdland and Dizzy Gillespie`s Coca Cola Club.  These corporate clubs, famous around the world, do not come close to what Smalls offers every night. 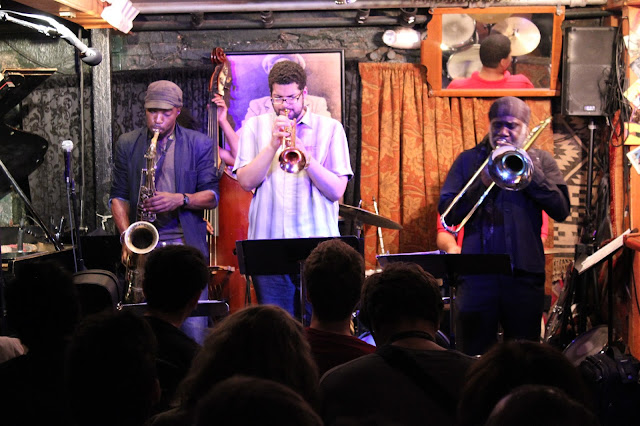 Smalls was started 20 years ago this month by Mitch.  He was ripped-off for thousands of dollars as he was preparing to open the club so there was no liquor licence for years.  Musicians and fans brought their own beer and liquor.  The jam sessions would go all night.  Homeless musicians practiced in a back room, sometimes they even slept there. Back then Mitch sat beside the entrance playing a violin. These days he plays a guitar, but the violins are still around, hanging in a room where the musicians chill before and after gigs. 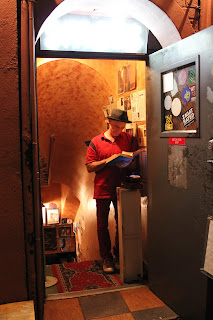 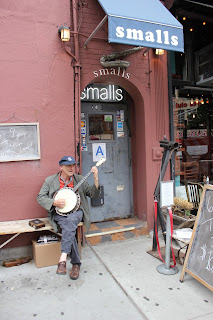 Bernie Senensky, the legendary Toronto jazz painist, remembers playing with Roy Hargrove for hours and hours one night. They started around 2 a.m. and went to 7:30 a.m.  Another time Bernie was caught in New York City during a major snowstorm. His flight home to Toronto was cancelled, and everything in Manhattan was closed.  Everything that is except for Smalls.  Bernie visits New York City every year, and almost every night he makes it to the basement club.  In the video below, tenor sax sensation Joel Frahm does his thing. 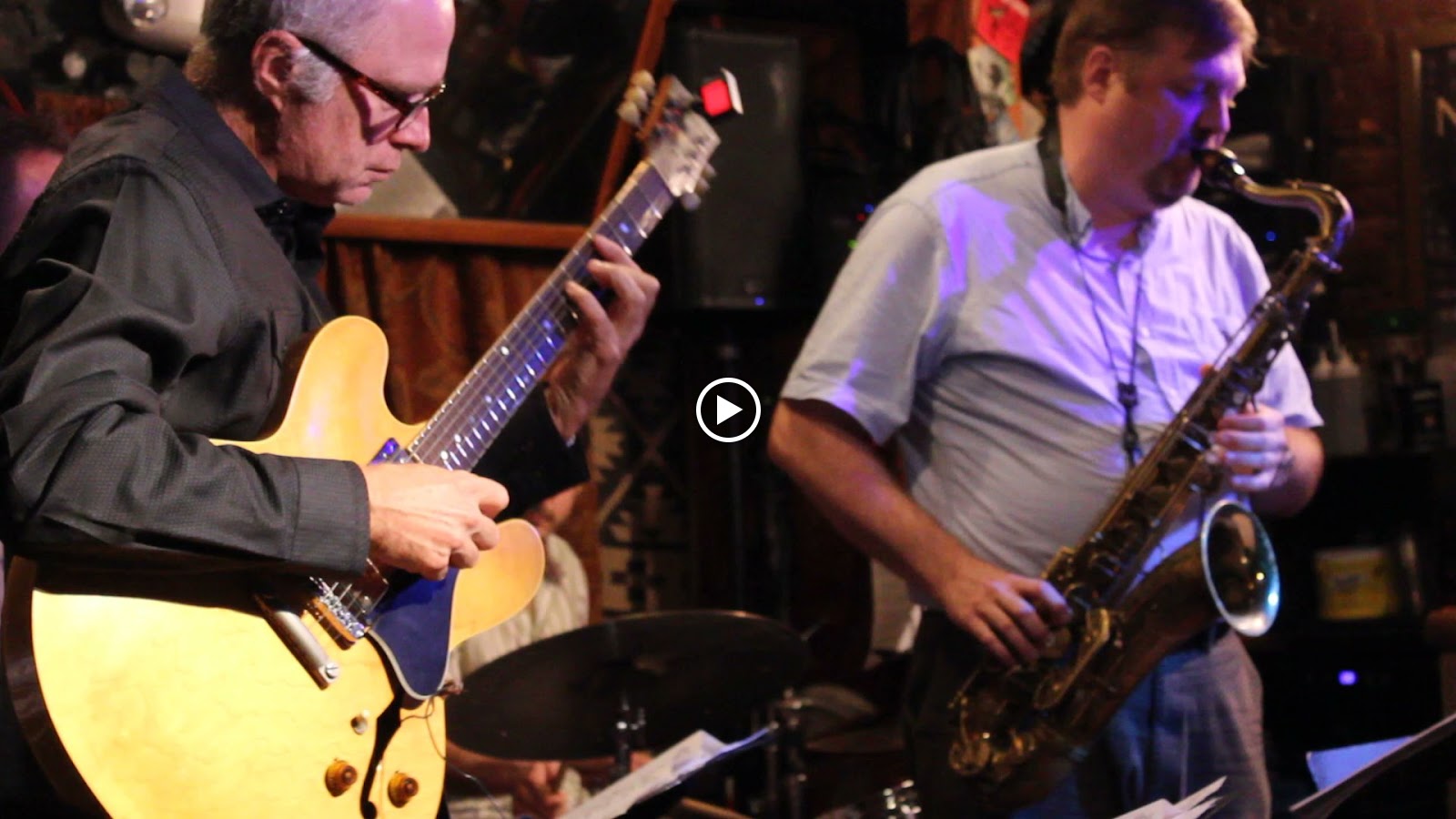 The Spike Wilner Trio performs regularly at Smalls. Spike is on piano, just like his mentor Harry Whitaker.  Paul Gill is on bass.  Yotam Silberstein is on guitar.  This is straight ahead jazz, adults only, no tricks.  This is what Smalls is all about.  Timeless and transcendent music that drifts up the stairs, into the West Village night and around the world.