The Monday Night Jam at the 11th Street Bar

NEW YORK CITY --- There is a terrific jam every Monday night at the 11th Street Bar in the East Village. 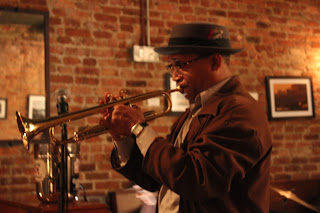 When I walked in Dwayne Clemons was blowing trumpet.  It is easy to walk past the place, which is located on the south side of the street between Avenue A and Avenue B at 510 East 11th St. (www.11thstbar.com). It is billed as a classic New York bar and Irish Pub.  The bar stretches along the left side, polished and gleaming, as you walk in. There is a larger room at the back, and that's where the jazz happens. The sand-blasted brick walls, the old wood floors and the music make for a warm, inviting place to enjoy some of the best music the World Capital of Jazz has to offer. 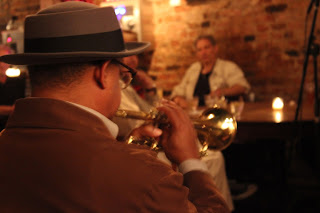 There is no cover.  Drinks are reasonable.  If you get hungry the place makes a great grilled-cheese sandwich, but nothing else.  It is a wonderful and authentic antidote to the corporate jazz clubs in the city that charge big bucks to see one set of music, and require you to buy at least two over priced drinks. The bass player Murray Wall is a regular there for the Monday Night Jam. 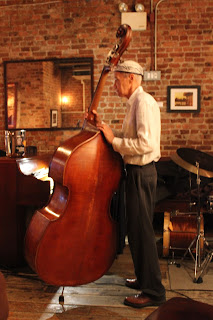 At the 11th Street Bar we drank beer for hours, and listened to world-class jazz that featured Murray Wall on bass (http://wikipedia.org/wiki/Murray_Wall), Dwayne Clemons (www.smallslive.com/artists/202-dwayne-clemons) on trumpet, Charles Davis on tenor sax, Pasquale Grasso on guitar, John Tank on tenor sax, among many others.  I had been listening to these Cats for years and knew nothing about this Monday night jam until Pasquale mentioned it to me. 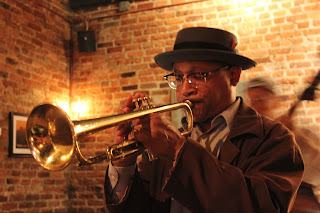 The East Village has lots of great restaurants, so it's easy to get a meal before the jam starts.  One my favourite places in this neighbourhood is Picola Strada at 77 East 4th St.  This owned and operated by a husband and wife team. Bring your own wine and beer.

I have watched Dwayne a lot at Smalls, and love his horn playing.  This gig at the 11th Street Bar is not nearly as crowded as the one at its more famous counterpart in the West Village.  But it is every bit as good.  No pretension. Just good music, cold beer and an attentive audience. 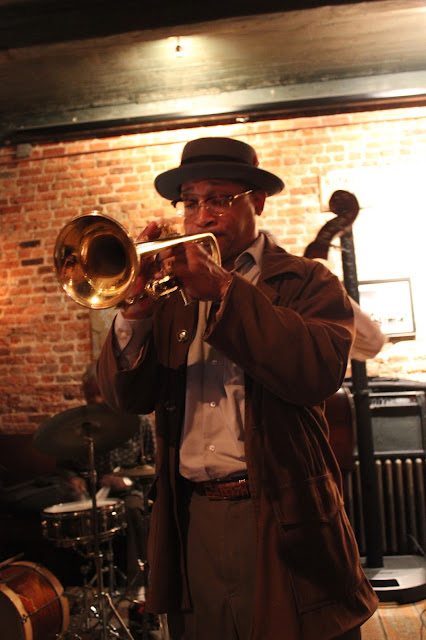 The Mississippi-born Charles Davis is a legend in New York City jazz circles.  If you are even a casual fan of jazz, you have probably heard Davis and his tenor or baritone saxophone.  In the 1950s he played with Billie Holiday, Ben Webster, Sun Ra, Dinah Washington and Kenny Dorham. In the 1960s Davis played with Elvin Jones, Jimmy Garrison, Illinois Jacquet, Freddie Hubbard, Johnny Griffin, Steve Lacy and Ahmad Jamal. He taught at PS 179 in Brooklyn.  He was also the musical director of a night club called Turntable that was owned by Lloyd Price. 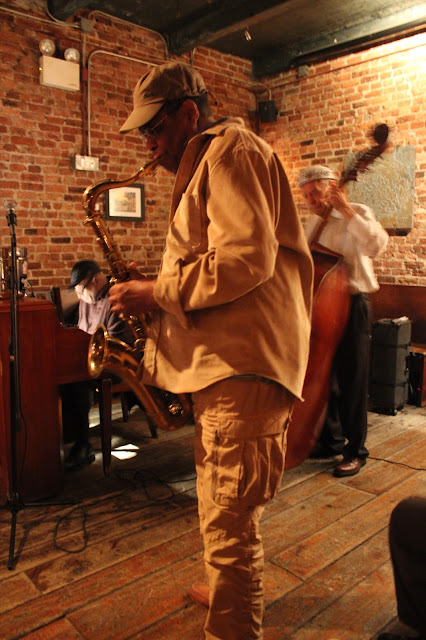 In the 1970s Davis worked with Clark Terry and Duke Ellington.  He played on the soundtrack for Spike Lee's Mo Better Blues in the 1990s.  And I was sitting a just a few metres away from Davis and his tenor sax. 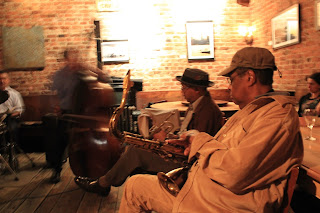 Davis was part of the Apollo Theatre's Hall of Fame Band along with Ray Charles, Joe Williams  and Nancy Wilson.  Those days are behind the great man, but as soon as he starts playing you know why he was a leading part of that scene. 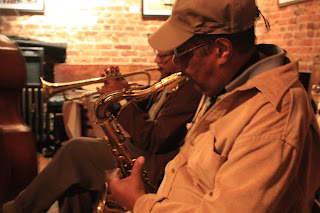 After a few hours at the 11th Street Bar, I like to head over to 3rd Street for another amazing jam night that I will write about in another post.