Brown's Trio, plus the keyboardist Nick Maclean, plays the TWH Social at 2 King St. West in downtown Kitchener, Saturday, Oct. 29th.  This fabulous venue is in the basement of the historic Walper Hotel where the jazz legend Lois Armstrong stayed in the 1950s.  Back in the day, Pops unpacked his trumpet, walked across the Mezzanine Level, stepped on to the  balcony overlooking King Street and played his horn.

Some people look forward to Christmas.  Others their birthday.  Brown loves Halloween because his award-winning band does its inimitable thing with Thriller.

"It is a fantastic show and we love to do it because those tunes are genius, they are brilliant pop tunes," Brown says during a recent interview with New City Notes.

"Some of the bass line are unbelievable, and they are really ripe for interpretation and leaping off, and using them as source material for something else," Brown says. 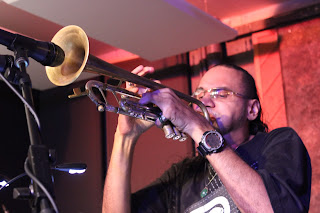 The BROWNMAN ELECTRYC TRIO just won the 2016 Toronto Independent Music Award for Jazz Group of the Year.  That makes two years in a row for that honour.  Not surprising really for the musician hailed by the Village Voice in New York City has Canada's best modern trumpet player.  Brown was in-and-out of New York City for 14 years studying under his teacher and mentor, the Grammy Award  winning Randy Brecker.

When Brown sets up on stage he has more than a dozen effects pedals at his feet.  This is modern, electric jazz at its very best.  By covering Thriller, he is following a long tradition among jazz greats who trawl the wide, rivers of popular music for jazz material.

"It's huge fun," Brown says of the show.  "As an improviser you get to be authentic to your craft, but you are still paying homage to your tune.  And those tunes are worth playing, really playing.  We don't screw around too much with the tune.  You will recognize the tune, you will be like: 'I know what that is, that's Beat It, that's Thriller.'" 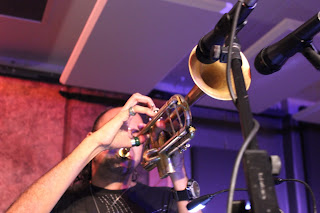 Brown transcribed and arranged the music years ago.  For five years he only performed this show in Toronto, where he lives.  But last year, for the first time, he took it on the road to the KW Jazz Room in Waterloo, where the house was packed with dancing fans.  So this year, The BROWNMAN ELECTRYC TRIO +1 does the Thriller show in Toronto, Guelph, Kitchener and Hamilton.

The music starts at 9 p.m. Saturday, Oct. 29th in the TWH Social.   Tickets are $10 in advance or $15 at the door.  The TWH Social is a fabulous venue in the basement of the historic Walper Hotel.  Come early and have dinner, the executive chef here, Jeff Ward, is among the best chefs in the country.  He jumped at the chance to have The BROWNMAN ELECTRYC TRIO do Thriller in his restaurant-club. Before taking culinary reins at the TWH Social, Jeff was a chef at Canoe in Toronto, opened several of Oliver&Bonacini restaurants around Ontario and Marisol in downtown Kitchener.

Brown's musical background makes him ideally suited for arranging and performing Michael Jackson's music.  Brown was the featured soloist for GURU, and toured with Paul Simon.  He funnels the sounds of funk, hip-hop and pop through his prism of electric jazz.  His band continues to win honours and accolades.  He is a performer, arranger, composer, recording artist, producer and owner of a non-profit recording label that plows all profits right  back to the artists.  The Cat is Miles Davis cool.  My words, not his. You can see and hear for yourself at the Halloween show in the TWH Social.

"We play the whole record," Brown says of the Thriller Show.  "We play the entire record from top to bottom, and turn it into a jazz-funk party." 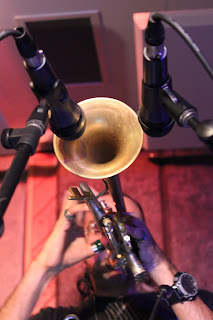 Brown and his record label, Browntasauras Records are no stranger to Kitchener music fans.  He played the Boathouse recently with Nick Maclean's group Snaggle.   That was a CD release party for Snaggle's latest CD, The Long Slog.  Brown was the producer of that recording, and can be heard on two tracks adding the unmistakable sounds of his trumpet playing.

He also played on At Street Level, the first CD by a sensational tenor sax player and composer Ryan Cassidy.  Kitchener born and raised, this jazz-soul-funk-R&B-hip-hop fusion artist brought Brown into the project because of his reputation for blending genres through his pedals and horn. If we are lucky, Ryan will show up at the TWH Social, and Brown will invite him to play for a while during the Thriller Show. 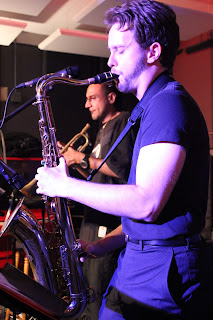 "People are blown away by the thing because it's Thriller, it's Michael Jackson's music, it's Halloween, it's a dance party and it's like authentic jazz improvisation all folded into the same thing," Brown says.  "Unless you don't like any of those things, it's got something for everybody."