Brownman Ali brings his acclaimed Blue Note Composer Series to this city every Sunday in May.  This will be the first time Brown performs the shows outside Toronto.  Every Sunday in May, 3-6 p.m., at the Rhapsody Barrel Bar.

"That is exciting, for me that is exciting," says Brown, who jumped at the chance to bring this series to Kitchener following the success of his five-show tribute to Miles Davis a year ago in this city. 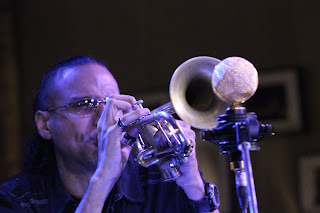 During the Blue Note Composer Series, Brown leads a quartet that explores the compositions of Joe Henderson (May 6), Wayne Shorter (May 13), Herbie Hancock (May 20) and Freddie Hubbard (May 27).   All recorded albums at Blue Note, one of the most famous labels in jazz music.  Henderson, Shorter, Hancock and Hubbard are among the most influential composers in modern jazz.

From 1955 to 1969, they epitomized the straight--ahead sound coming out of New York City.  For many jazz fans this is what jazz sounds like, period.

"These are the touchstones for any great jazz musician," says Brown.  "These are the historians and technicians that we all grow up around as professional artists, investigating their music from a performance standpoint is something we all do."

Brown incubated the Blue Note Composer Series at the Trane Studio, which operated out of 964 Bathurst St. in Toronto for nine years.  It closed in 2012, but the series lives on.

"I spent a lot of time investigating how these incredible artists were writing, so composition, and that's what led to the series," says Brown.

Leading four different quartets to cover the compositions of four different jazz giants takes some serious chops.  Brown is up to the challenge.  Hailed by the Village Voice in New York City as Canada's preeminent jazz trumpet, Brown is a musical force of nature. He spent years in New York studying under Randy Brecker after graduating with a degree in physics from the University of Waterloo with a 97 per cent average.

(Yeah, I know. The man is a polymath who reads three books a week.  Inspired by a biography of the Roman Emperor Nero, Brown composed a piece called the Madness of Nero that is on Rites of Ascension, the latest CD from the Nick Maclean Quartet.  But I digress). 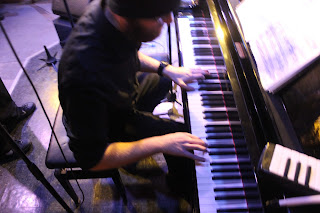 Brown won a National Jazz Award, and SOCAN Award for composition. He leads six different bands, and the non-profit label Browntasauras Records.  He's toured with Jay Z, Missy Elliot, Paul Simon and the late GURU of Gangstarr and Jazzmatazz fame. Brown was a featured soloist with GURU for four years.

First up in the Blue Note Composer Series is the music of Joe Henderson.  Brown has a tentative set list that starts with "Blue Bossa" from Henderson's first album released on Blue Note called Page One (1963).

"Every artist has to have a primordial record, and for Joe Henderson, for me, it is Page One," says Brown.  "The sound of his tenor and the way he improvises and stretches over these tunes.  He wrote all of these originals for Page One, and to hear him as a saxophone player over these bananas tunes is one of my most poignant experiences growing up."

Born in Trinidad, Brown was raised in Brampton, the music he listened to back then influences his trumpet playing to this day.

"People ask me all the time: 'You play a lot of notes, more than most trumpet players, where does that come from?' It's because I listened to more saxophonists growing up than I did trumpet players," says Brown.

"When Coltrane plays all that stuff nobody blinks, but a trumpet player plays that many notes they are like: 'Holy crap, that's amazing,'" says Brown.

Anyway, back to the set list for the Henderson show --- Out of the Night, Home Stretch, Step Lightly, Recorda Me, Isotope, Black Narcissist, Serenity, Mojo, Momasita, The Kicker, Punjab and Granted.  The show has two sets --- 75 minutes each.  It is a lot of music to cover in that time, so Brown is not promising to play every composition on the list.

Brown believes it is better to have too much music prepared, rather than run out toward the end. You never know, if the fans are on their feet, clapping and yelling for more, it's always better to be ready with a well rehearsed encore.

Joe Henderson was born in 1937 in Lima, Ohio.  Henderson studied tenor saxophone in Detroit, which remains one of the world's great jazz cities, before moving to New York in 1962.  A year later he released his first album on Blue Note called Page One.  That was followed by Our Thing in 1963, In 'N Out in 1964, Inner Urge in 1965, and Mode for Joe in 1966.  He left Blue Note after Mode for Joe.

Joining Brown on stage for all four shows is the talented jazz pianist and composer Nick Maclean.  Kitchener-Waterloo's Tyler Goertzen is on drums. On bass, is Lauren Falls, who spent years playing the scene in New York City, and is now back in Toronto. 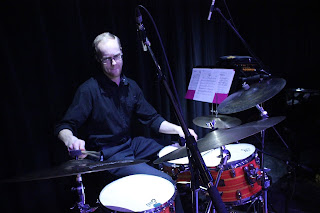